As we wind down the year, we want to thank you for your support along the way. Wishing you Comfort & Joy this holiday season & beyond! 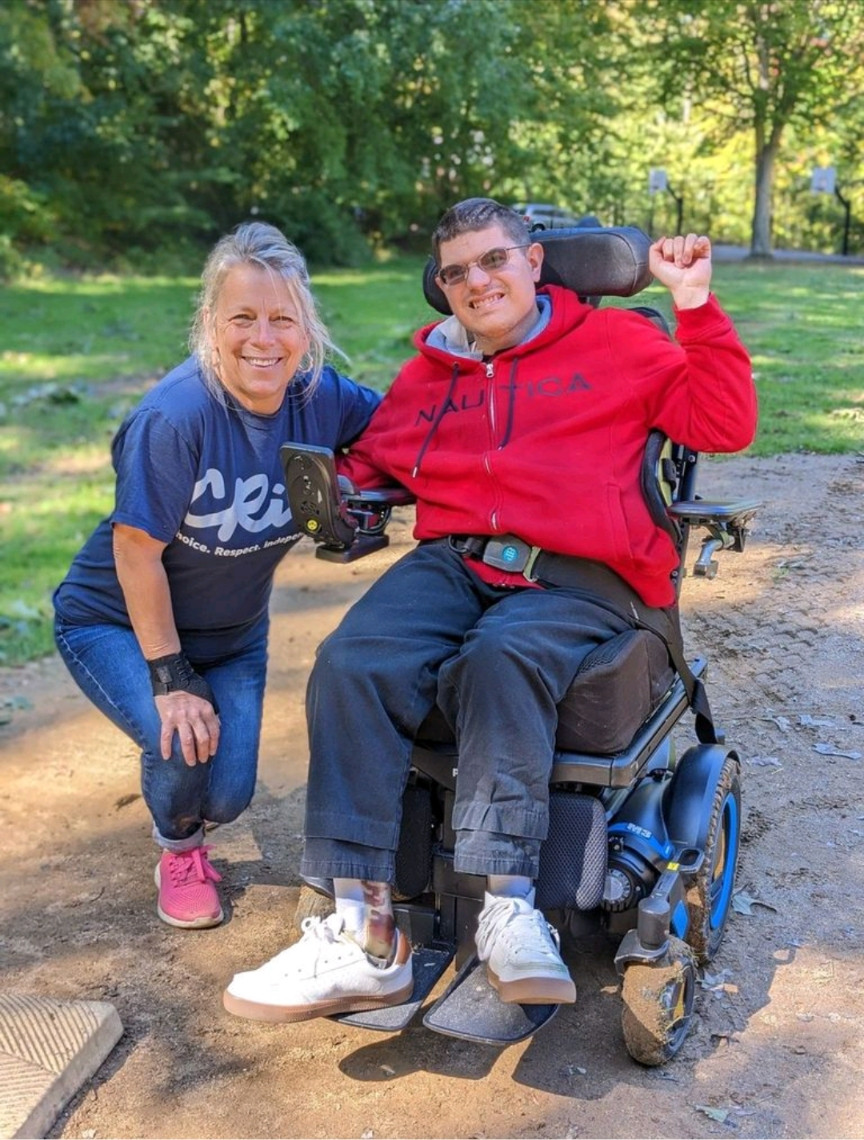 We at CRi hope you are enjoying the holiday season and experiencing the comfort and joy that means so much to each of us, especially at this time of year. Recently, a new CRi family reached out to us with their heartfelt story about a significant change in their lives. A family desperately in need of comfort & joy that YOU enable us to provide through your generous donations in support of our mission.

THANK YOU for helping CRi be able to continue to help others in need in our community - Donate Today!

"We all have unknowns in our lives, and for my family, that included what our daughter, Katie, would do once she aged out of high school at 22 years old. Where would I continue to find caregivers? How will Katie be properly cared for in an environment where she will continue to thrive as my husband, Kurt, and I age?

For many years my therapist brought up the question about long-term plans for Katie, pointing out that realistically Kurt and I would not be physically able to care for her indefinitely. Frequently she would encourage me to look into group homes. Each time I cringed at the thought, even to the point of tears.

In addition to my enormous fear of such a place, I knew that Katie did not have the “correct” Medicaid waiver to get into a group home, despite being on the waiting list for over a decade, and there was little to no chance of her getting one of those coveted waiver spots until our family was truly in a state of crisis, such as Kurt and I being unable to care for ourselves, much less, Katie.

To paint a realistic picture of that scenario, Katie would continue to live with us, Kurt and I would grow older, search for caregivers for Katie, train them, fill in when they could not come to work, downsize our home (but could not move into in an apartment or townhouse because of Katie’s loud, LOUD voice) until one of us fell ill or died; at that point Katie would “most likely” get the Medicaid waiver needed to move into a group home.

Katie’s transition would be traumatic for her, without our ability to help with the group homes election, set up her room to make it familiar, take her there to visit rather than it be an emergency transition.

For those of you who are unfamiliar with the Medicaid system and caring for a child with life-long disabilities, our situation is not unique. This is an exhausting, never ending, often lonely path to follow as friends move on to the next chapter in their lives.

In October of 2021, Katie had a dramatic, full-blown, grand mal seizure while out with her caregiver, Brittany. Brittany handled it beautifully and called 911. Katie was transported to the hospital, did not have to be admitted, and recovered quickly. However, this event reminded us that we must ALWAYS be prepared for the unexpected.

Following this event, I wrote to Katie's caseworker asking for help. I described what our lives look like on our worst days and was asking for one of those coveted waivers. When the caseworker visited us the following week, she explained (again) that there were many families in the depths of despair who would be awarded the waiver before Katie would, families that were in crisis. It was then the caseworker explained that because of Katie's increased medical needs, she qualified for a different type of group home with on-site medical care, AND it was covered under Katie's current Medicaid waiver.

She mentioned that there was a group home operated by a nonprofit organization, CRi. It was 15 minutes from our house with one opening and she thought it would be a great fit for Katie. She emphasized that these openings usually only come once or twice a decade, as there are only five residents living in this home. I was extremely reluctant to visit the home, not believing that there could ever be a group home where Katie would thrive.

Katie functions on a 12-24-month-old level. How would she get the love and attention she needs and gets from us and her current caregivers? About a week later Katie, Brittany and I reluctantly, and with a bad attitude (just Brittany and me, Katie is always up for an outing) went to visit the home.

For those of you who aren't familiar with group homes, they are regular houses in regular neighborhoods, just purposed differently. We were greeted by friendly staff (and a thermometer), as well as papers to sign regarding COVID exposure/symptoms; okay, good start. The manager of the home showed us around, including the one empty bedroom, and openly answered all of our questions. We met two of the residents of the home, as well as a staff member.

One of the residents can be described as a "male" version of Katie...thin, wobbly when walking, smiley and LOUD. He and Katie appeared to click in their own special way. Brittany was taken to the couch by the resident to chat. The icicles were starting to melt, and our hostile attitudes were being peeled off one layer at a time. Katie made herself comfortable in a loveseat and chattered as usual. Brittany and I were exchanging "happy glances" as we continued to ask questions. We couldn't believe it. WE LIKED THIS HOUSE AND THOUGHT IT WOULD BE A REALLY GOOD FIT FOR KATIE!

After about 30 minutes into the initial visit, Brittany asked, "How do l get a job here?" Brittany knew that if Katie moved, she would be out of a job. The manager mentioned that she had one full-time opening and strongly encouraged Brittany to apply to work at CRi.

I don't know if I was more shocked that Brittany asked about working there or that the manager said there was an opening, and she would love to have Brittany working there.

We left the home pinching ourselves, wondering if this was all too good to be true. Okay, yes, the manager told Brittany to apply, but really, what are the chances that Katie would get accepted there, and that Brittany would be working there?

As I told Kurt the story that night, he was skeptical about my enthusiasm, as I had done a 180° turnaround. He was equally surprised. We began the application process.

Just when we didn’t think it could get any better, Kurt, Katie and I were invited to visit the house again and take measurements in “Katie’s room.” As we went in, Katie headed straight to the loveseat she liked during the first visit. The house was happy, full of life with the smell of lasagna cooking for dinner. We were able to meet more staff members, as well as the two residents we had not met on the first visit. Imagine our surprise when one of those residents said, “I know her, that’s Katie. I went to school with her,” as she went and knelt down beside Katie and let Katie clap her hands!

She proceeded to stay at Katie’s side while we visited and measured the room. Since then, Katie has moved into this home and Brittany got the job! Katie will get to be housemates with her friend from high school. Kurt and I will be able move into a new season of our lives. WOW!

Thirty-four years ago, I did not think I would be rejoicing that our 35-year-old daughter was "accepted” into a group home, be buying her new sheets, spiffing up her wardrobe, and taking her to visit the home just as excited as if she were heading off to college.

For the first time ever, Katie will have a life outside of us. I saw that she was ready and so were we!

Looking back, I don’t know what we would have done without CRi. This organization makes a tremendous, positive impact on so many individuals and families. Please, as you plan your end of year giving, consider a generous donation to CRi. I know we will!

CRi is dedicated to providing personalized resources to youth at risk of homelessness, and people with mental health needs or developmental disabilities. Since 1975, CRi has focused on individualized and professional care, supporting the people who need support most. CRi envisions a world where all people have the choice, respect, and the resources needed to live a fulfilling life with dignity and purpose.

Please help us continue to deliver on our mission and vision by making a donation today.

⭐Give the gifts of choice, respect & independence this holiday season by donating to the Comfort & Joy Campaign here!